Brought to you by Cipla

The goal of antiretroviral therapy (ART) is to suppress HIV and, by doing so, to make sure that people living with HIV can enjoy long and healthy lives. To understand how ART works, it is important to first understand how HIV infects the body once the virus has entered it. This is called the life cycle of HIV.1,2
Most commonly, the virus enters the body when an HIV-negative person has unprotected sex with an HIV-positive person with a virus that is not suppressed.
ART is made up of ARVs (antiretrovirals) from at least two classes which, together, act to suppress the HIV in the body.1
The ARVs can be given as separate medicines or combined into one tablet, also called FDCs (fixed dose combinations).

There is no cure for HIV, but it is treatable with ARVs and, when taken
properly and consistently, people with HIV can live long and healthy lives.

*Fusion and entry inhibitors are HIV medicines (ARVs) that block this step of the HIV lifecycle, stopping multiplication of the virus eg Tenofovir, Efavirenz.

*Proteases inhibitors are ARVs that block this step of the HIV lifecycle, stopping the virus from making more of itself e.g., atazanavir, darunavir and lopinavirlritonavir. 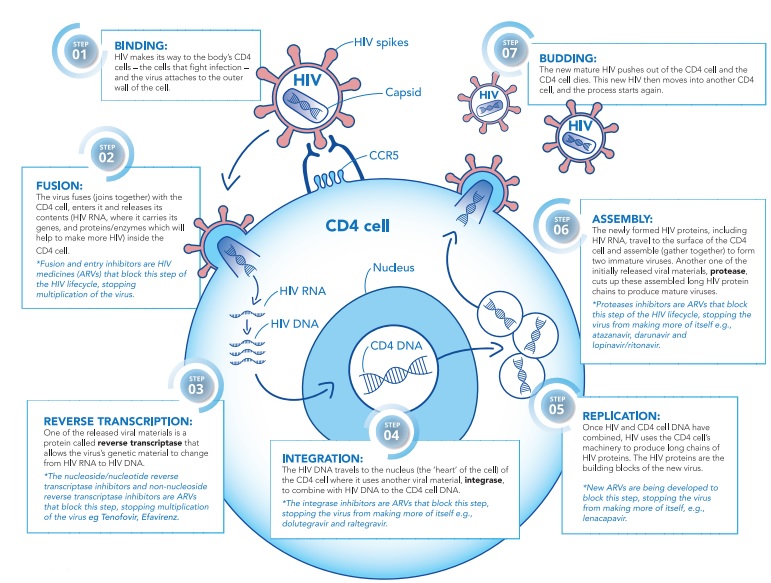 THIS PROCESS IS CALLED HIV REPLICATION. IT HAPPENS BILLIONS OF TIMES A DAY, IF A PERSON IS NOT ON ART (AND TAKING IT CORRECTLY).3

WHAT IS ACNE? Acne is a common skin condition that causes pimples on the face, neck, shoulders, chest and back.1 It can be emotionally stressful and, ....

HIV | human immunodeficiency virus HIV destroys the ability of the body’s immune cells to function and so over time, people gradually become immunodeficient (unable to fight off infection).1d